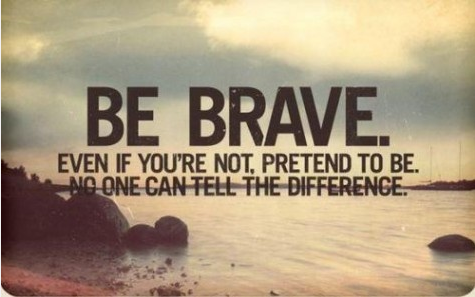 …when in doubt pretend!

I love this quote. Mostly because it reminds me of how far I’ve come from being a painfully shy child. People who know me now often struggle to believe it, but for years at school I probably barely spoke to anyone. Then I decided that it wasn’t how I wanted to be so I changed it. Not overnight, but years of pretending to be confident and constantly challenging myself to do things that frightened me, and eventually it got easier. I am now completely intolerant of shy adults…what is it they say about converts?

Anyway, how does this relate to training I hear you ask! We’ll it’s kind of how I’ve been feeling about training for the first couple of weeks. I could use lots of excuses like the weather, it being January…the list is long and boring, but what it comes down to is it hasn’t felt right and I haven’t enjoyed it. We all know the feeling of that first run, horrible, the second, worse, the third, the worst, but then it is meant to get better. It hasn’t. I was up to run number 6 and each one was more awful than the last, so I’ve been pretending.

I knew that eventually it had to get better…experience has taught me that with patience and hard work most things do. I’ve just never had any patience, so I’ve found this slow progress pretty frustrating. But finally, yesterday I had a eureka moment. Last session of the week, my first brick (run straight off the bike) session, and finally a good run…not fast or pretty, but something that felt like I might eventually make it to a marathon…well at least a half-marathon and then a fast hike up a mountain.

The plan had worked. After a bit of a trudge through most of the week, only Tuesday night’s run club with JCI offered any banter, no Marcus and Combat Ready this week, I got all my training in (10 hours in total, with a few press ups thrown in for fun) and eventually the pretending paid off too. Training became fun again. Then as if to confirm what I have been telling myself about just getting on with it, or the “Suck it up, Princess!” philosophy, I got it reconfirmed by Combat Ready’s Sunday blog. Great minds 😉

Bravery isn’t the lack of fear. It is doing things despite the fear. We should never avoid things because we might fail. The only failure is never trying in the first place. Challenges make us better, challenges make us stronger, challenges get us closer to who and where we want to be. Bravery in my opinion is just the ability to ‘suck it up’ and get on with it. So in essence it is all pretending.

And just incase you were wondering I still have to pretend sometimes when I’m feeling shy, and there is a voice in the back of my mind that says I might fail at Celtman, but I accept the challenge, because I wouldn’t like myself very much if I didn’t face the things that frighten me.

So that leaves this week’s plan…in glorious Technicolor. Very excited about finally getting back into the Pentlands on Sunday. Fingers crossed hypothermia can be avoided. 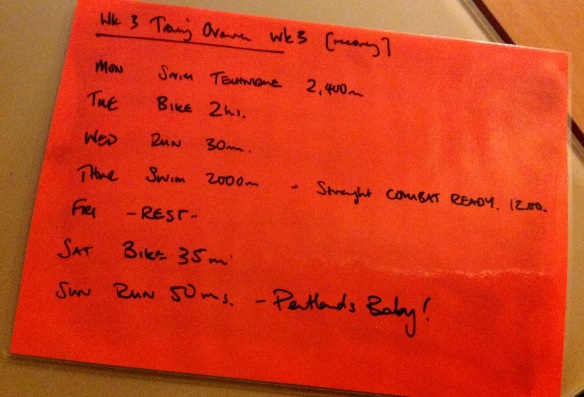 Disclaimer: As usual everything I say is purely my ill-informed opinions and should not be treated as any sort of expert testimony.

Added extra: If you want a laugh check out YouTube to see me singing along to Flower of Scotland while on my rollers on Saturday. Inside is the only place you will ever see the white bib-shorts…fashion, and decency, disaster!